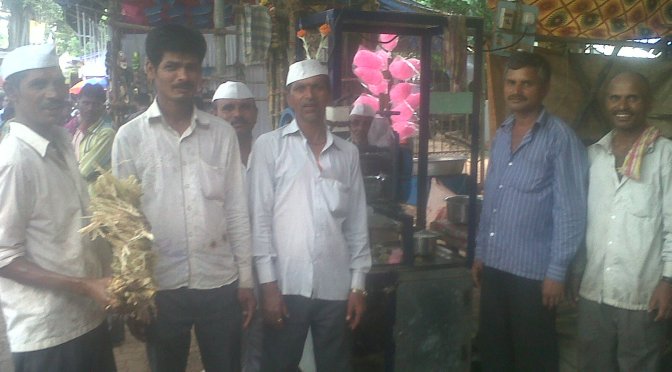 For music is the spice of life

They worked on without any strife

There was a certain joy about them

Amidst all the confusion and mayhem…..

And as we climbed down the steps leading down from the Mount Mary Basilica in Bandra, there was a certain joy we felt in our heart. Everything was so nice and so divine here in this beautiful area in Mumbai. Every year the Bandra Fair was held in celebration of Mother Mary’s birthday on September 8. Following this there was a ten day feast in the form of the Bandra Fair. Filled with a certain ambience of beautiful candles, and lovely miniatures this had its own charm and old age grandeur. Not everyone who came here came with any expectation. They just were there that is it? No, give no take. Yet everyone seemed to look at Divine Mother with a longing look, a hope filled in their eyes. It is this that gives the world the strength to move on. This implicit trust, faith, and hope that we get when we go to any religious place.

Filled with such thoughts I made my way through the crowd and was quite thirsty and really wished to relax in a place.

And fair enough, there at the end of the winding crowd was a sugar cane stall. And what a relief. For me it was one of those regular ganne ka juice centres in Mumbai, little did I know this was something special?

So what could be special about a sugarcane stall? Well we had this person behind the machine singing away to glory. He had no care in the world, no sweating the small stuff. There was a charm about him that instantly tugs your heart. And that charm is his honesty; his voice was so true and honest. He was singing a Marathi song, a local folk song, but he had so much honesty in him, that I understood what he was singing. He was communicating love and warmth to the world.

I walked a little further through the benches laid there and sat down. There I saw a grim looking cashier keeping all the money in place. There were seven to eighth of them who were at the machine. T his was quite unnatural as I had always seen only two people working on the machine in other stalls. I had come with my sister and we were discussing how happily the man was working. She then told me that all of them were from Pune and they had come especially for the Bandra Fair. they had been coming for 27 years.

Quite intrigued and further aroused with curiosity I went and spoke to them. They said they were from Pune and came to set up a stall here since 27 years. it was their custom, they said and this is their offering to Mother. It was such a contrast. Here there is the Basilica for the Christians and here we have these dedicated Hindus coming from an Indian town all the way to an Indian metropolis just to serve the people with their bit of social work. So what if they were bringing the sugarcane from their village and had come here to make business, their intention was to be near Divine Mother and serve during the celebrations.

Ganpati, Popat, Tukaram, Sakharam, the name does not matter, they had a common name attached to them and that was Love. The fervour with which Govind, the singer was managing the sugarcane into and out of the machine is to be seen to be believed. This is what struck as absolutely intriguing and wonderful for me and it is a one time experience for me. When we complain about the vagaries of life, here was Govind, proving that if you learn to love what you do, then you will do what you love to learn.

They also stood together for the photo with a kind of glee that is seen to be believed. They expressed that the photo be sent to them to their village and I immediately took down their address. It was ages since I heard an address stating only the village and the taluka and I felt this is India, this beauty of being in our country. Life never stops here, progress goes its way, villages grow their way, but communication is still intact. What a wonderful experience to meet such people who make a difference to your life.

This group of people from Pune has shown how interest and intention helps to make a better world, whether it be being at the Bandra Fair or singing ones way into work.

You May Also Read

More From My Other Word Press Blogs: Rukmini Krishnan

When the New Normal is the Old Normal

Beginning of Another #Pandemic

Unity & The Power Of 9 In Corona Times